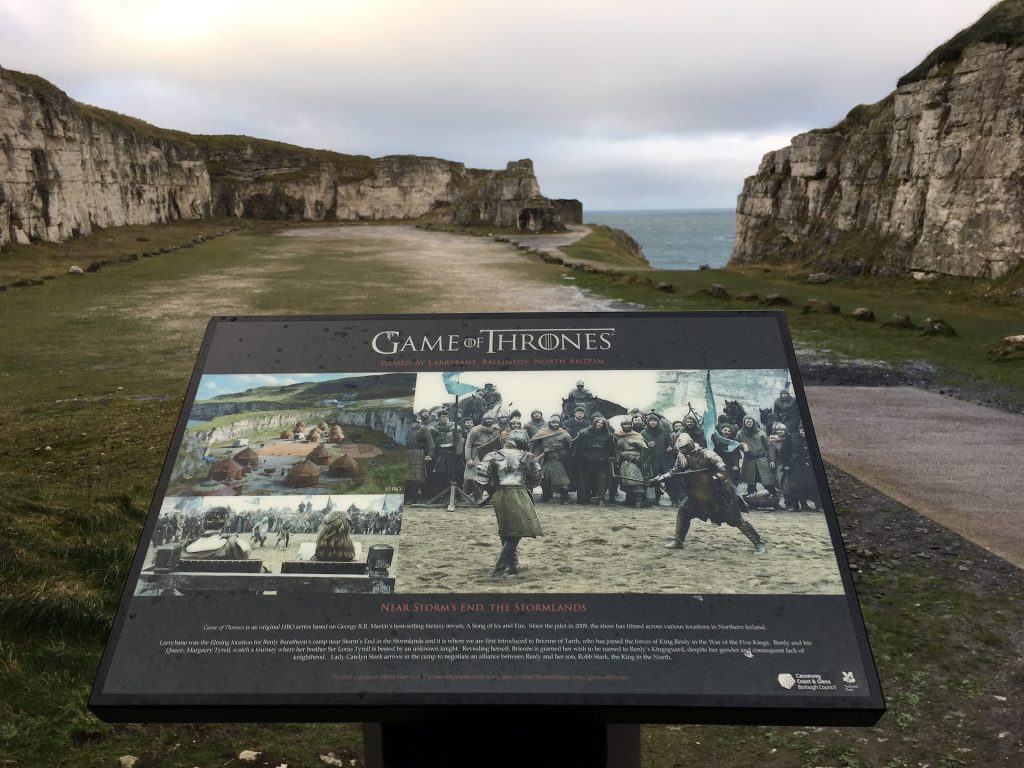 The final season of Game of Thrones has landed, and fans have been going wild in anticipation of the series’ conclusion. Who will live? Who will die? And will it even matter if the living don’t defeat the dead?

We’ll find out on 19 May with what is rumored to be a spectacular battle shot in Northern Ireland over 55 days. Reported to be the biggest, most expensive action scene ever seen on TV, the battle for Winterfell and the Iron Throne is sure to not disappoint.

In an Instagram post that has since been taken down, Assistant Director Jonathan Quinlan thanked cast and crew for braving the cold and mud while filming in Toome and Maghermorne, established filming locations in County Atrium.

The HBO series had been heavily shot in Northern Ireland as well as other countries, (check out our blog on Split, Croatia) since production began almost 10 years ago. In that time the Northern Irish government estimates it has brought $147 million into the local economy. Naturally, many of those dollars have been spent on the cost of producing one of the most popular series of all time, but others have been spent by fans who flock to the country to see where the action takes place.

So many have turned up, that filming sites such as the Moneyglass set in Toome and Maghermorne Quarry in Maghermorne, along with 2 other established sets are to be turned into legacy locations. Fans will not only be able to visit Castle Black and the Wall they will also be immersed in an interactive, informative display about the shows production, story line, cast and crew.

Jeff Peters, vice president, licensing and retail, HBO, said: “HBO is thrilled to celebrate the work of the Game of Thrones creative team and crew by preserving these locations and inviting fans to visit Northern Ireland and explore Westeros in person”.

So, if you do want to show up in person, you’ll have to wait until summer, but until then there are already a lot of Game of Thrones locations to visit in Northern Ireland with most being found in County Atrium. So back to the famous battle scenes. If we hopped on a plane and rented a car from Belfast Airport where would we go?

The first stop would be 11 miles to the east of the airport to Magheramorne, about a 35-minute drive. The actual set is a disused quarry that once produced crushed stone but now acts as Castle Black and Hardhome. As you can imagine, the site is heavily monitored and its gates are locked. Fans have to be content with an exterior view of where the final battle takes place or wait for the legacy project to be completed.

From Magheramorne, Moneyglass, Toome is a 45 minute drive inland to the west. Quite close but we would recommend making that the last stop on your itinerary because Maghermorne is one of the first stops along the Giant’s Causeway, the only UNESCO World Heritage site in Northern Ireland. The causeway is a coastal route that includes a host of other iconic Game of Thrones filming locations.

The Giant’s Causeway itself is pretty impressive. It was created by millions of years of volcanic activity leaving the area distinguished by 40,000 basalt columns lining the coast. It gets its name from a legend which says it was actually created by the giant Fionn mac Cumhaill as steps to get him all the way to  Scotland.

Whether it was Mother Nature or Fionn mac Cunhaill we will never know but what we do know is that this route has been consistently rated as one of the top 5 Road Trips in the world and not just because of its Game of Thrones connection. Along the drive north, road-trippers will find many Doors of Thrones. These are ten intricately carved doors each depicting part of Season 6 and found in some unlikely places. Travelling north along the coast will assure fans a glimpse of some of them as well as stunning Game of Thrones locations.

The first stop was featured in the first episode of the first series of Game of Thrones. Cairncastle stood in as North of Winterfell where Ned Stark beheads a Night’s Watch deserter. Fans standing on the rolling hills should be able to revisit the scene and tick the first location off their list. That’s a lot of firsts! 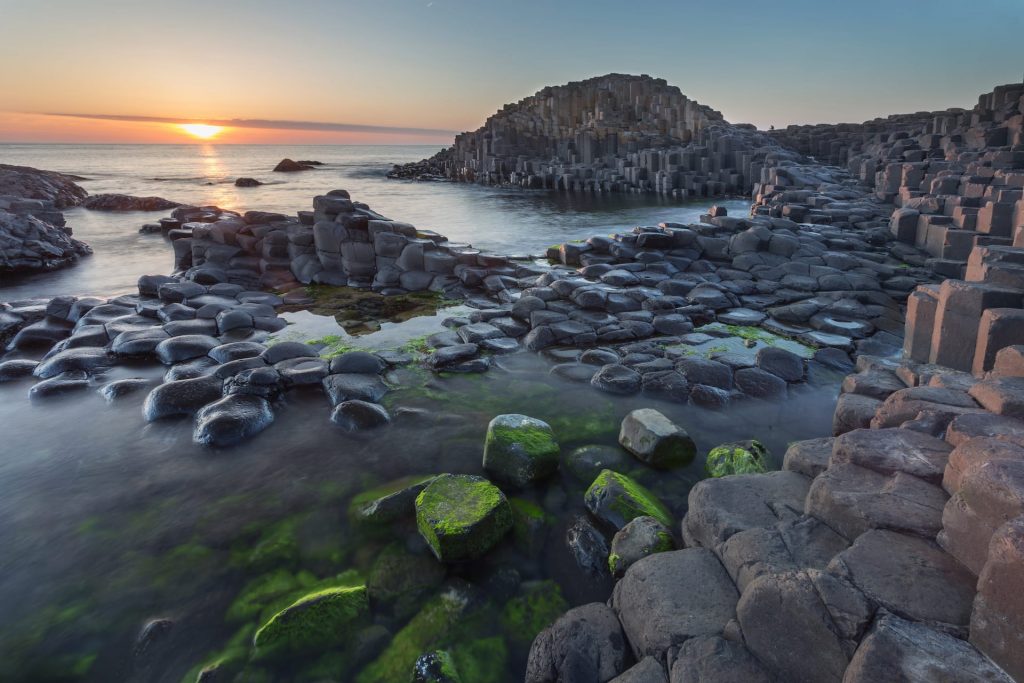 Further up the coast is the Glens of Atrium. There are nine glens in Atrium splaying out towards the coast. These beautiful plains were the perfect choice to stand in as part of the Dothraki Sea.

From expansive scenery to enclosed darkness, the Cushendun Caves were the site of Melisandre’s shadow baby’s birth. The 400 million year old caves were a tourist attraction before becoming a creepy birthing site but fans will relish in their macabre association. The caves share their name with the nearby village which is a quaint place worth a stop, if only to see one of the Doors of Thrones in Mary McBride’s Bar.

Still on the Giant’s Causeway is the picturesque Murlough Bay that producers have used for various scenes such as when Theon and Yara take a horseback ride and where Davos Seaworth finds himself washed alive up after the Battle of Blackwater.

Back in the car for the last stop along the coast is a short drive to Ballintoy Harbour or for Game of Thrones devotees Lordsport Harbour. The site features in both Seasons 2 and 4. Most gruesomely in Season 4 when Melisandre burns people alive and more peacefully in Season 2 when Theon is baptized – although being he embraces the religion of the drowned God, it’s hard to tell…

Before leaving this cheery filming location behind, venture into the village of Ballintoy to see another one of the Doors of Thrones at the Fullerton Arms.

Now going south and inland to one of the most photographed places in Northern Ireland, head towards the village of Armoy for the Dark Hedges experience. Known to fans as the Kingsroad, north of King’s Landing, the leaning trees were planted in the 18th century to frame the lane up to Gracehill House, a mansion where another one of the Doors of Thrones resides.

Keeping the car pointed south will get you to our final destination. The Winterfell set in Moneyglass, Toome where cast and crew weathered the elements to shoot the hotly anticipated battle scene. Earlier, fans sites of the series reported what appeared to be barracks of a castle being constructed in the village. Those preparations joined the transformation of a disused cement works into the 300-mile Wall defended by the Night’s Watch. As is the Maghermorne location, Moneyglass is a secure site that does not allow public entry, that is until both are open to the public in June 2019 for fans.

There are more Game of Thrones filming locations to be seen in Northern Ireland and beyond, but a road trip up the Giant’s Causeway is a good way to see some of them combined with a natural wonder of great beauty.

The series may be concluding, but the impact of its popularity appears not to be the only legacy for Northern Ireland. If you are like us, then we’ll probably see you in Magheramorne and Moneyglass for the ultimate Game of Thrones legacy experience.