Rome, The City Of Eternal

Rome is the capital city of Italy, and one of the cities with the most abundant history and cultural heritage in the world. Full of beautiful and historic squares, landmarks, buildings, every form of art and food are the combination that will make the journey to this city unforgettable and unique. Full experience for body and soul!

(there are hotels in the city center looking at the fantastic view of the Colosseum. Check for booking them now since you don’t want to miss waking up to this view).

Wonder off the graphic streets of Rome that balances architectural treasures and beauty in staggering awe. Feel the rhythm of the city and get to a gastronomic journey with authentic Italian pizza, traditional pasta of Rome, Italian ice cream (gelato), and of course, enjoy the excellent Italian coffee.

Rome is famous for its large, beautiful, lively, and imposing squares filled with statues, fountains, obelisks, and churches. Let’s see some of them. 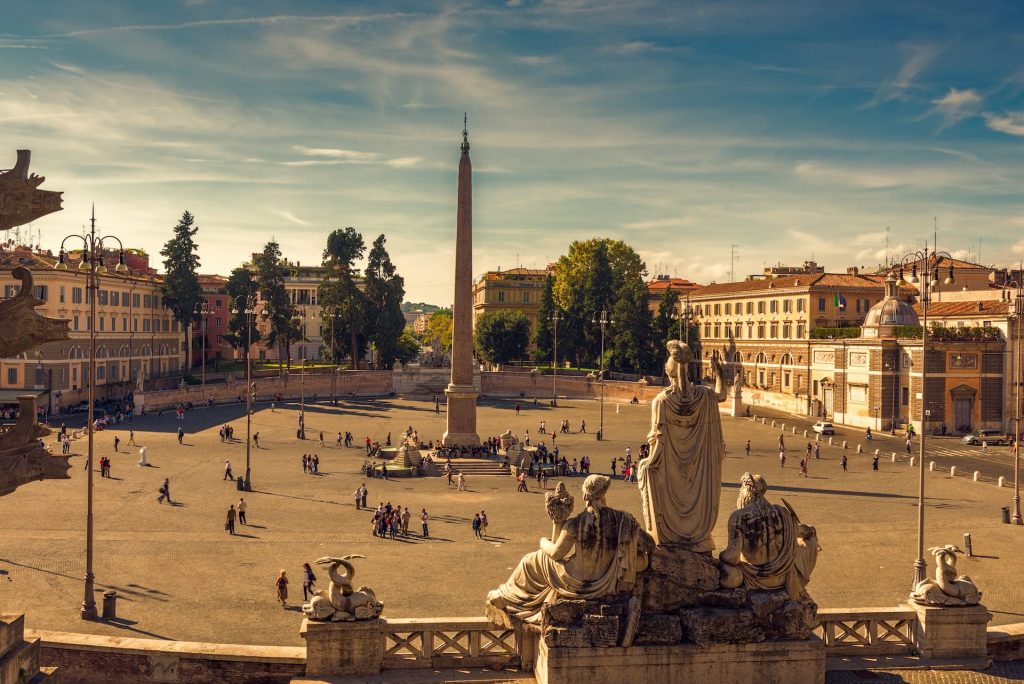 Piazza del Popolo rests on the north side of the city center. It was formerly used for events and public executions. In 1810 they placed the four Egyptian lions with fountains, so they gave the square a different glamour. It has one of the oldest obelisks in Rome. And Santa Maria del Popolo is one of the most important Renaissance churches in Rome and a significant part of Roman art and architecture. 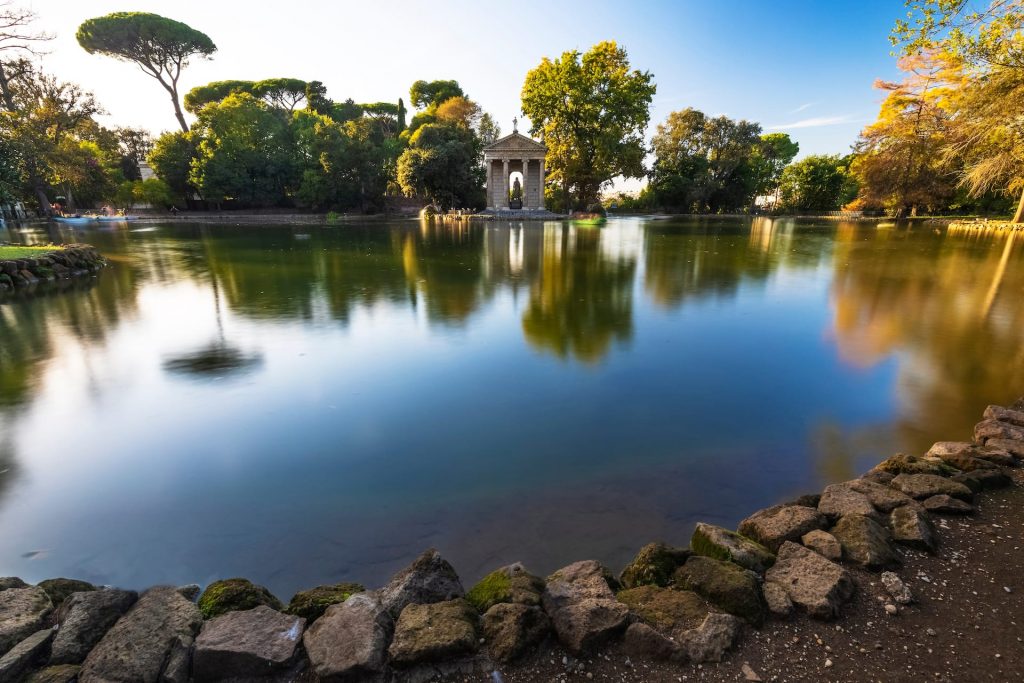 Pincio is above Piazza del Popolo, and it is characterized as the most beautiful balcony of Rome because of the amazing view. It is an ideal place to see the sunset, and you can also gaze from the Piazza del Popolo to St. Peter in the Vatican. From there you can go to the Villa Borghese gardens which are the perfect place for a picnic, a walk or jogging and also a boating tour in the lake. 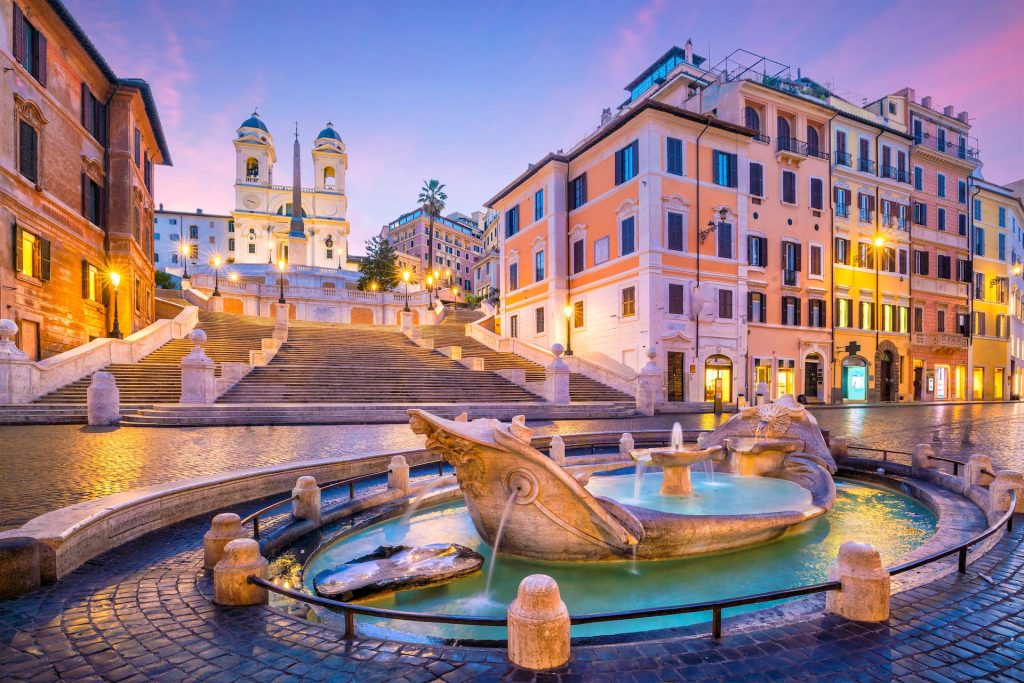 Feel free to roam on a shopping spree through picturesque alleys and Buildings of Via del Corso, the most famous shopping street, and let the road take you to the Spanish stairs of Piazza Di Spagna.
Piazza Di Spagna (the Spanish square of Rome) is where the Spanish Vatican Consulate used to be. Be sure to try some of the Traditional Italian Pasta, while you’re there in the nearby restaurants. 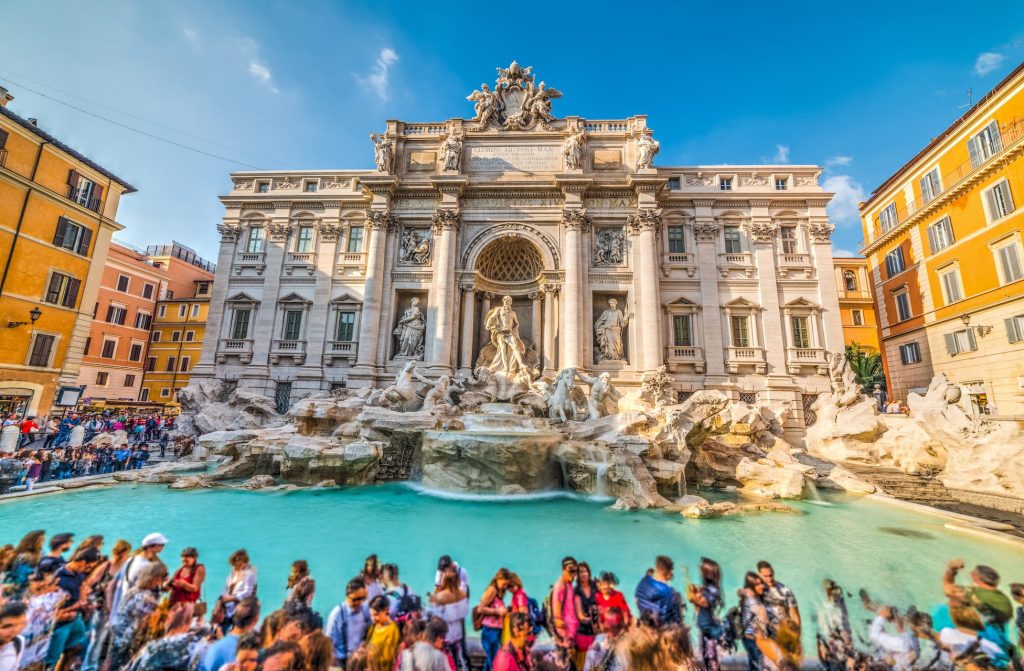 You must visit Rome’s and World’s most famous fountain, Fontana Di Trevi, the most romantic place in Rome. It’s very likely to witness marriage proposals in that fountain. You should also pick your coin and throw it over your left shoulder inside the fountain as a promise that you will revisit Rome and also make a wish. It is marvelous at day and night. 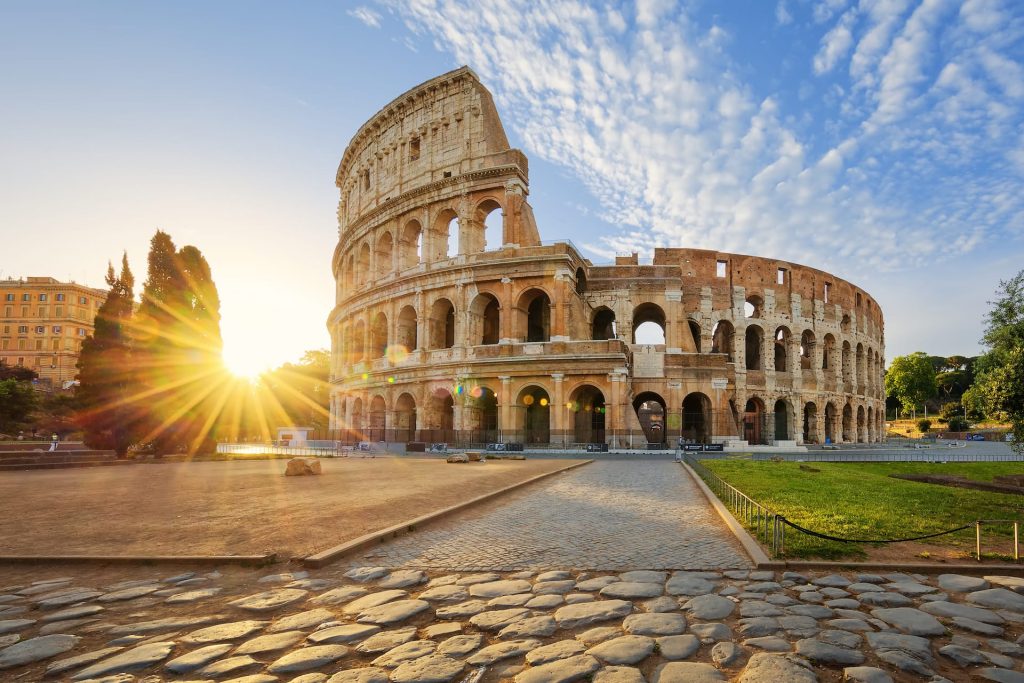 The trademark of Rome, the most striking attraction of the city, stands tall for almost 2000 years and is the symbol of the Roman Empire. It got its name from the colossus, the colossal statue of Neuron, which used to be at that place before Colosseum was built. It’s enormous, it has four floors and could fit up to 45,000 people. Gladiators were fighting fearful beasts in the arena.

Next to the Colosseum is another significant landmark, the Roman Hill of the Roman Market. One of the seven hills of Rome with history and civilization that counts 10,000 years back. 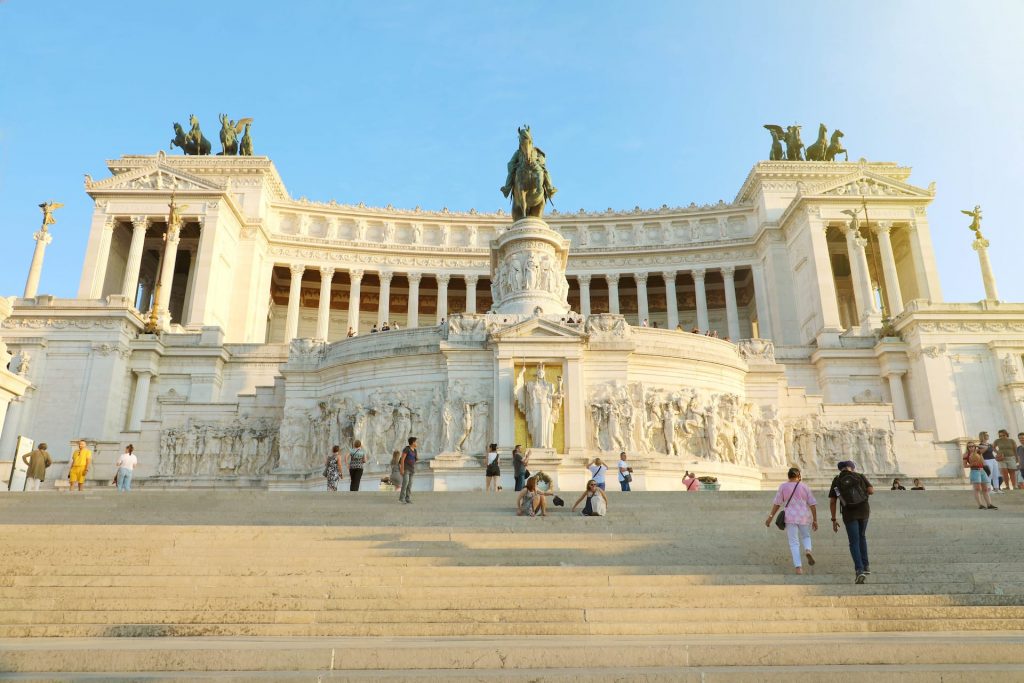 The square of Venice with the marble masterpiece of Victor Emmanuel II build in late 1800 to early 1900. 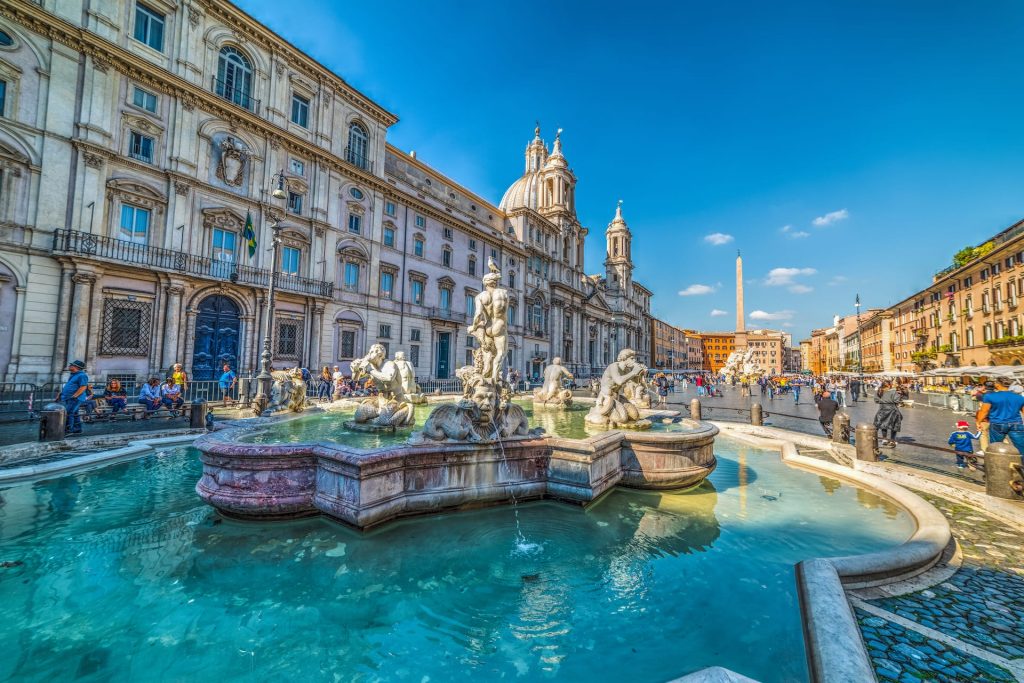 Piazza Navona is the most beautiful and lively square with an elongated oval shape. The reason is that in this place there used to be a stadium. It has three fountains with the central and most famous called Fontana de Quattro Fiumi (The Fountain Of The Four Rivers). 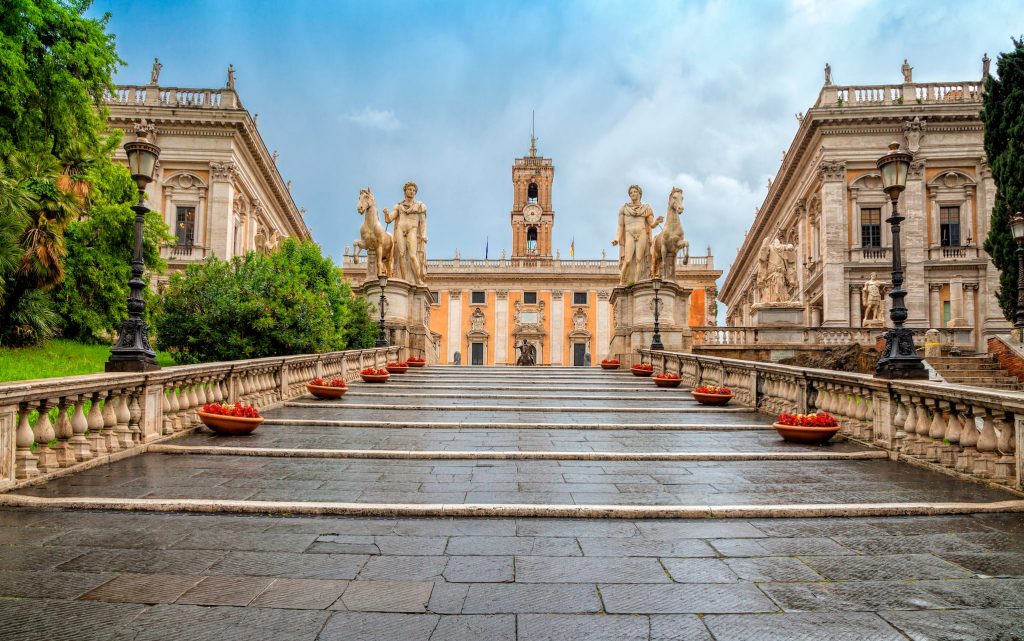 Capitolio is where the town hall stands. It is one of the most historic squares of Rome, Michaelangelo built the Cordonad (the stairs) that lead to the square, and he also designed the whole square. The buildings in the square have a visual trick in the design that fools you into thinking that the square is more extensive than it is. 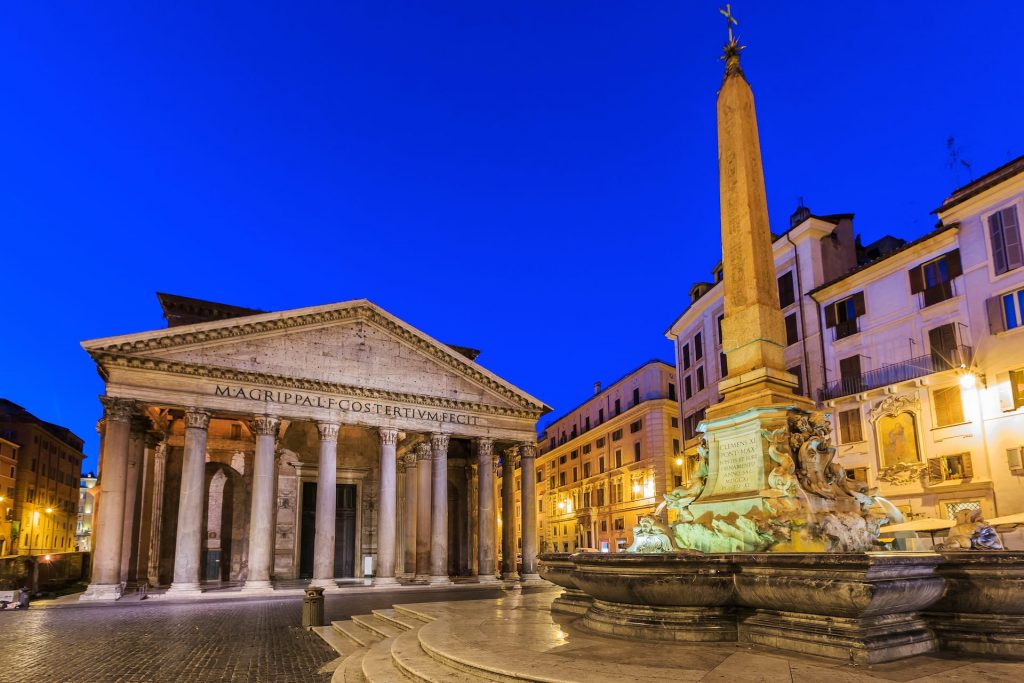 Piazza Della Rotonda, with the imposing Pantheon, the largest Roman monument to date almost indestructible. It was built in the 1st century B.C. and dedicated to all the gods of ancient Rome (Pantheon, from the ancient Greek word “Pan,” which means Every and “Theon” which means God).

Rome is an ideal place to taste Authentic Italian Pizza and Pasta, as well as also for wine lovers. Italian wines are some of the best wines in the world.

Gelato, the Italian ice cream, is the best in the world. You shouldn’t miss the chance to try it no matter the season you visit Italy.

Coffee time. An institution of Italy is coffee. It’s no surprise or coincidence that espresso and cappuccino were born in Italy. You must surely try this delicate taste with cornetti (the Italian croissant). The Italians discovered espresso because they couldn’t wait until the French coffee was ready. So quick coffee (espresso) was the answer. Cappuccino got its name from the Italian monks, the Cappuccini. 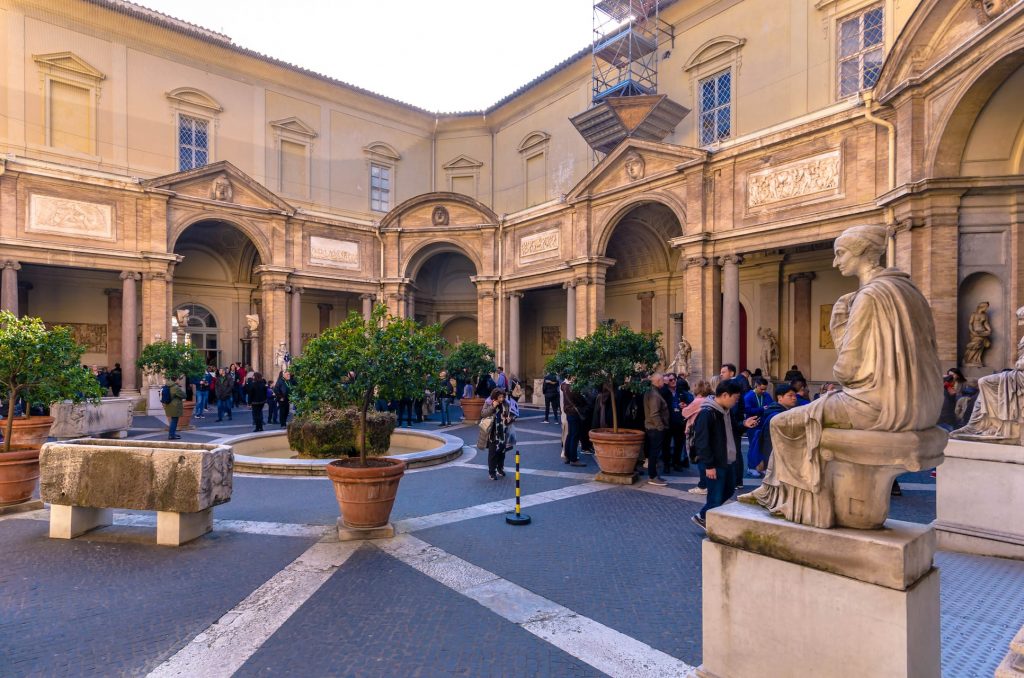 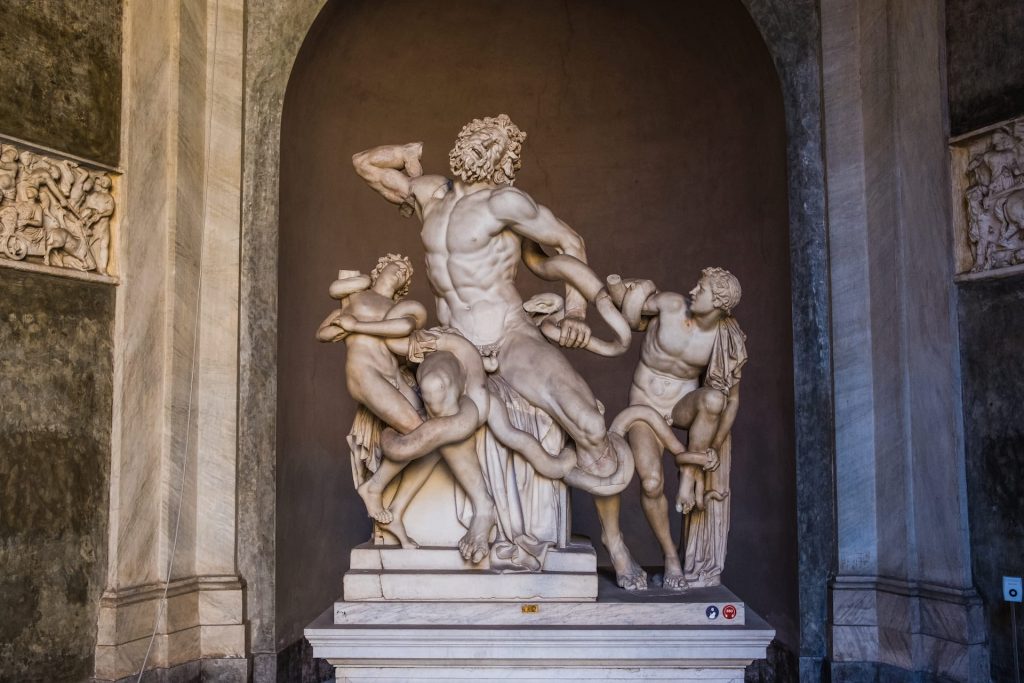 The Octagonal courtyard of Belvedere formerly called the courtyard of statues, there are the most prestigious Vatican Statues, like the Apollo of Belvedere, the God lamb of the River and the statue of Laocoon. 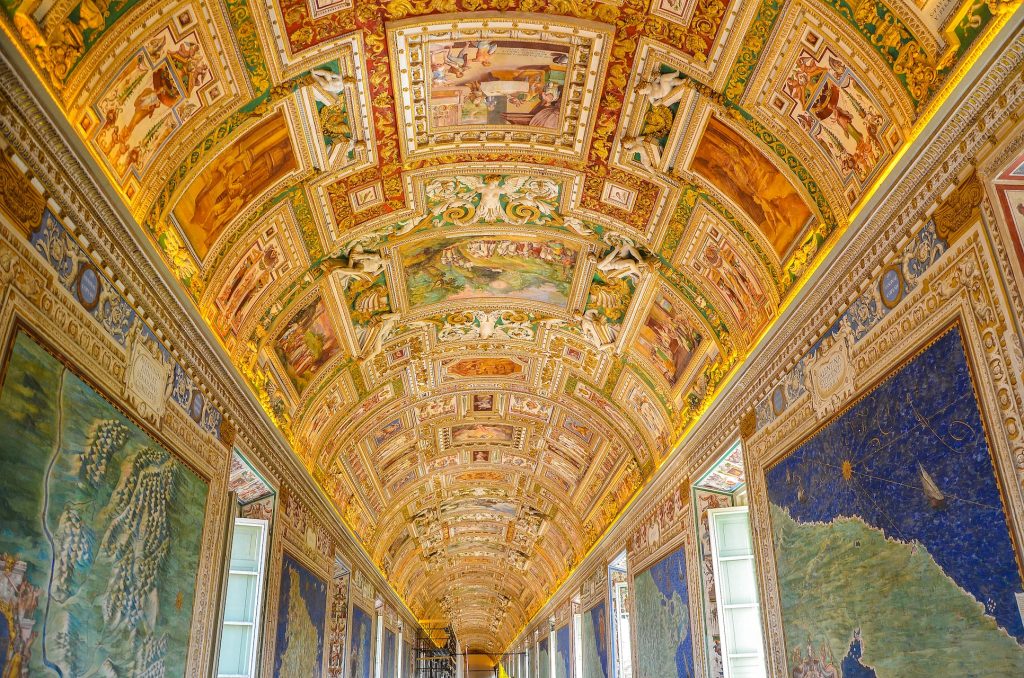 Beautiful mosaic floors and even more amazing painted ceilings that give magnificent awe to the space that surrounds the visitors. It’s the farthest gallery of the Vatican, paintings, and architecture at its most elegant, all the way to the Sixteen Chapel. 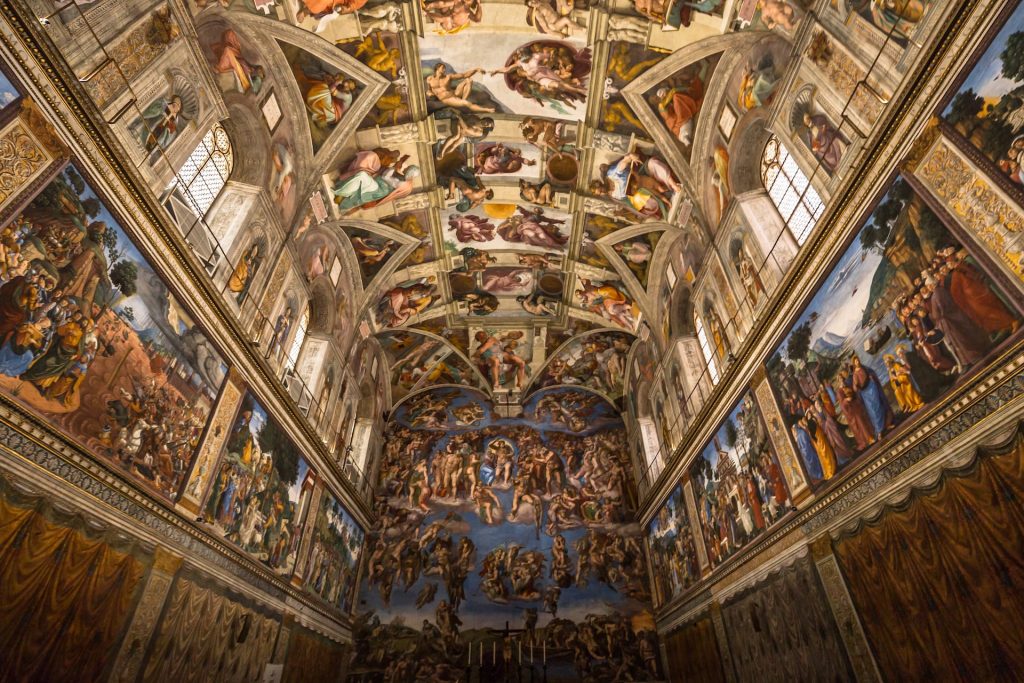 Capela Sistina or Sixteen Chapel is the most significant and historic chapel in the Vatican City, with the most exceptional projects on the roof “The Creation” and the “Second Coming”, projects of Michaelangelo. Artworks that you should see at least once in your lifetime.

Pro TIP: At the official website of the Vatican museum there’s an app that lets you see the 3D interior of Capela Sistina but there is no comparison at seeing it up close and be speechless in awe. 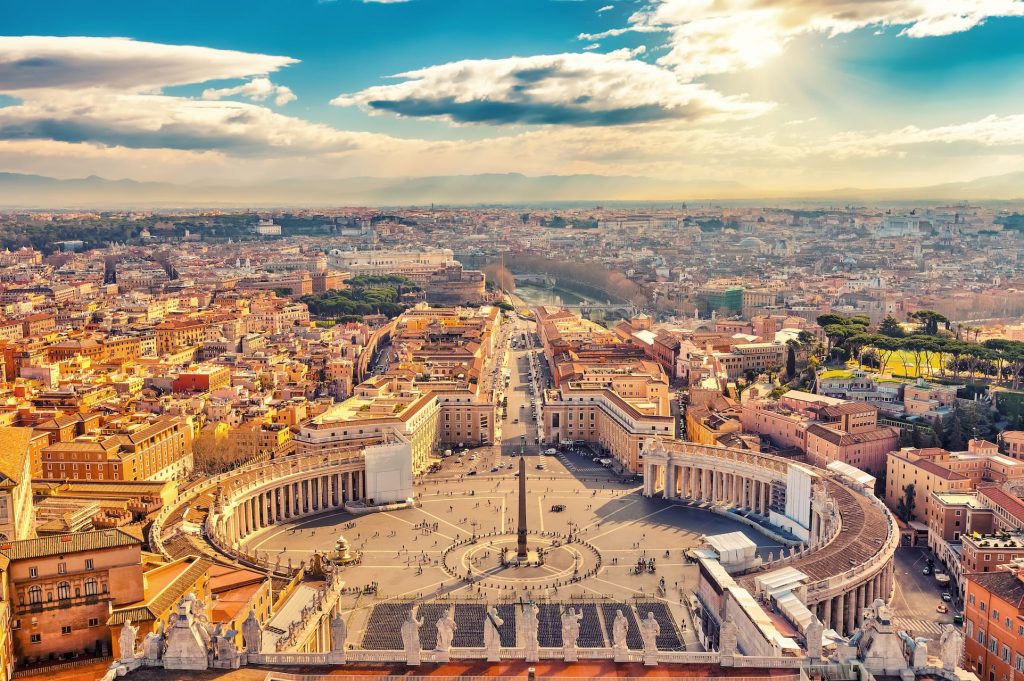 Of course, one of the most amazing things to do in the Vatican is to visit the Basilica of St. Peter, the seat of Catholic Christianity. You can go all the way up to the dome and reach the rooftop of St. Peter, just 300 stairs to the top, but the reward is fantastic. A perfect view of the Vatican square and Vatican City.