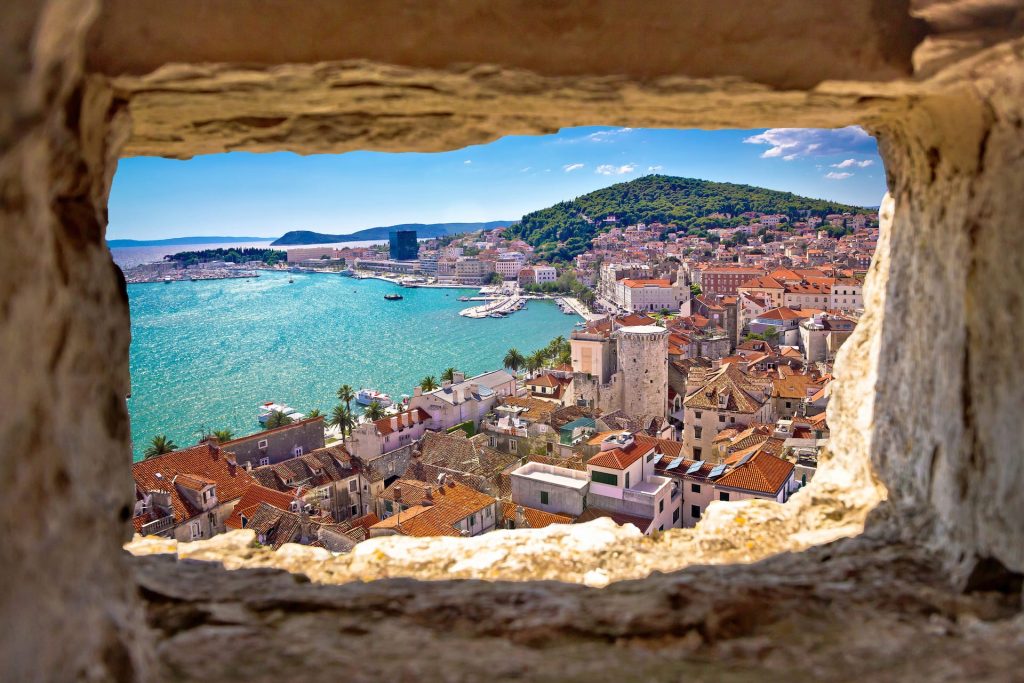 With the arrival of summer many travelers head to the sea. Be it on a beach or a boat, summer days spent close to water are some of the best you can have. Combine them with an atmospheric, ancient town and your beach days can be broken up by visits to some truly amazing sites. A perfect place to have such a vacation is the beautiful town of Split, Croatia.

The Greeks formally settled the area as a colony named Aspálathos in 3rd or 2nd century BC. Later the Romans took over, eventually making it capital of Dalmatia province in 650 AD. If you are as fascinated as we are by 1,700 year old buildings and the Game of Thrones TV series, Split could be the place for your summer vacation. Let us explain… 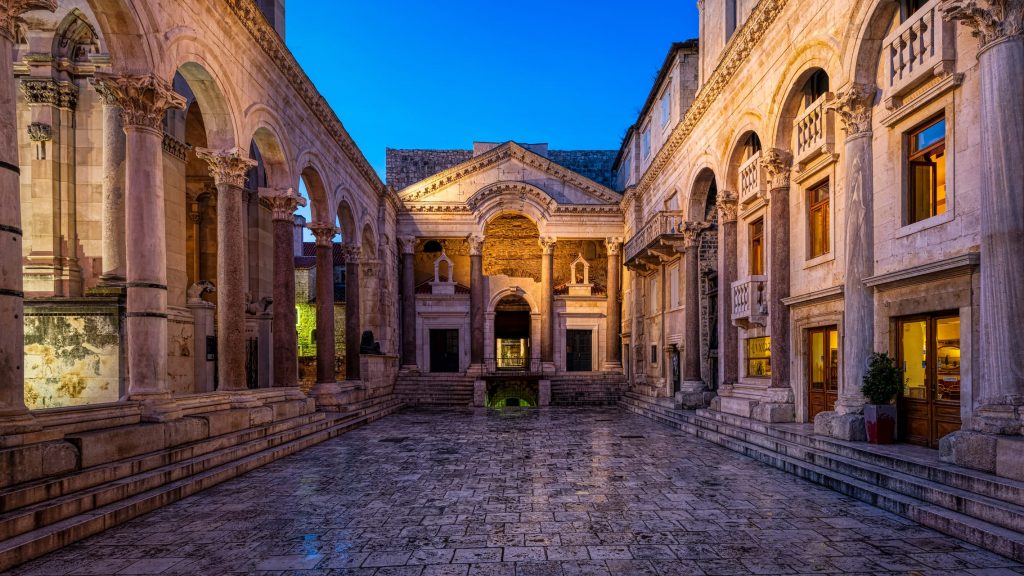 In 295 AD, Roman emperor Diocletian choose Split for his retirement residence so he could be close to his birthplace of Salona about 5km away. It took ten years to build a sprawling, walled structure which served as a fortress and imperial palace. Construction used the best materials in the empire; marble from Italy and Greece, columns and sphinxes from Egypt.

Its rectangular design was based on a traditional Roman military camp with four sections. The two southern sections housed the imperial family, while the remaining northern ones housed guards, slaves, and servants. Gates centrally built into the four exterior walls were each named for a metal: Gold, Silver, Bronze, and Iron. A road divided the southern and northern sides with a courtyard known as the Perystile taking up the middle.

It was an organized but lively set-up and today as tourists stand in the Perystile taking pictures and taking in the best-preserved example of Roman palatial architecture, it’s easy to imagine the hundreds of people attached to the emperor living and working there. Easy, because one of the most fascinating facts about this structure is that its 220 buildings still house around 3000 people as well as retail businesses and restaurants. 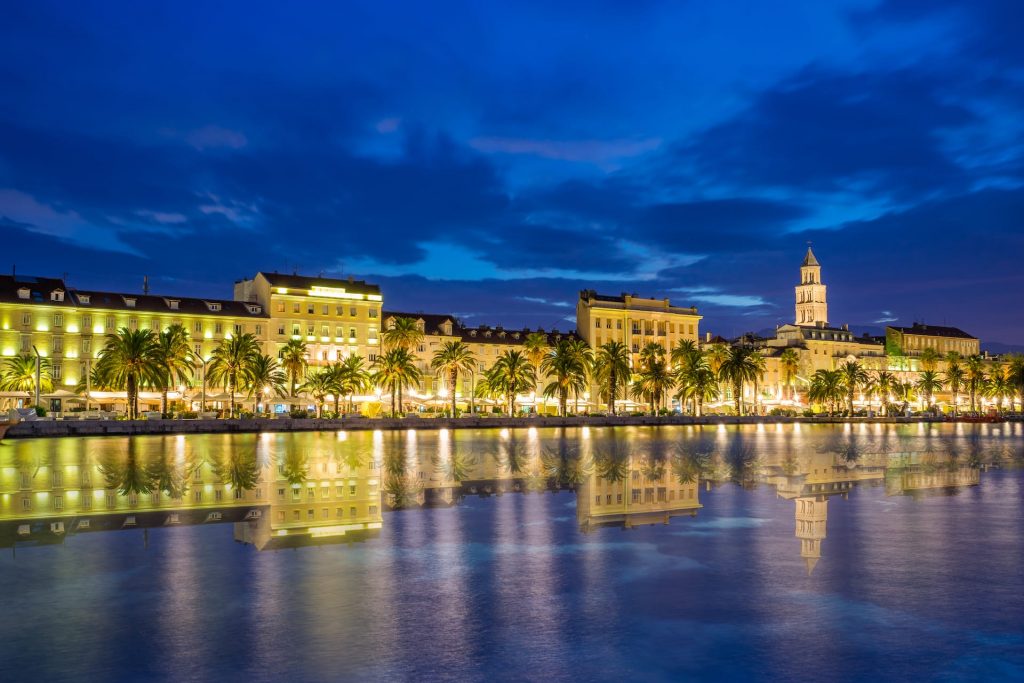 Upon his death in 311 A.D. Diocletian was placed in a mausoleum within the palace walls. In his life, the emperor had not only been master of an extravagant palace but also a prolific persecutor of Christians. Call it a very late act of revenge, but in the 5th century, Christians destroyed Diocletian’s sarcophagus and converted his resting place into a church dedicated to one of his many victims.

The inside of the cathedral still maintains many of the original elements including a frieze with renditions of Diocletian and his wife and two rows of Corinthian columns. Other features originate from Romanesque masters of the 13th century who carved and painted scenes from the Gospels on the right-hand altar, the vault above the high altar and the wooden entrance doors.

From this period ending in the 16th century, a bell tower was added to the original structure and although it eventually collapsed, it was rebuilt in 1908. Tourists to Split insist that climbing up the steep staircase for a view of the old town is a must.

Originally, the cathedral’s baptistery was a temple dedicated to the Roman god Jupiter. The structure is still the original with the barrel-vaulted ceiling and decorative frieze but where a statue of the god once stood, is now a life-sized bronze of St John the Baptist. The font, used in Christian baptisms, was also added in the 13th century. Carved out of stone found on-site, it includes a rendition of Croatian king Zvonimir – the earliest representation of a European king on a stone sculpture. 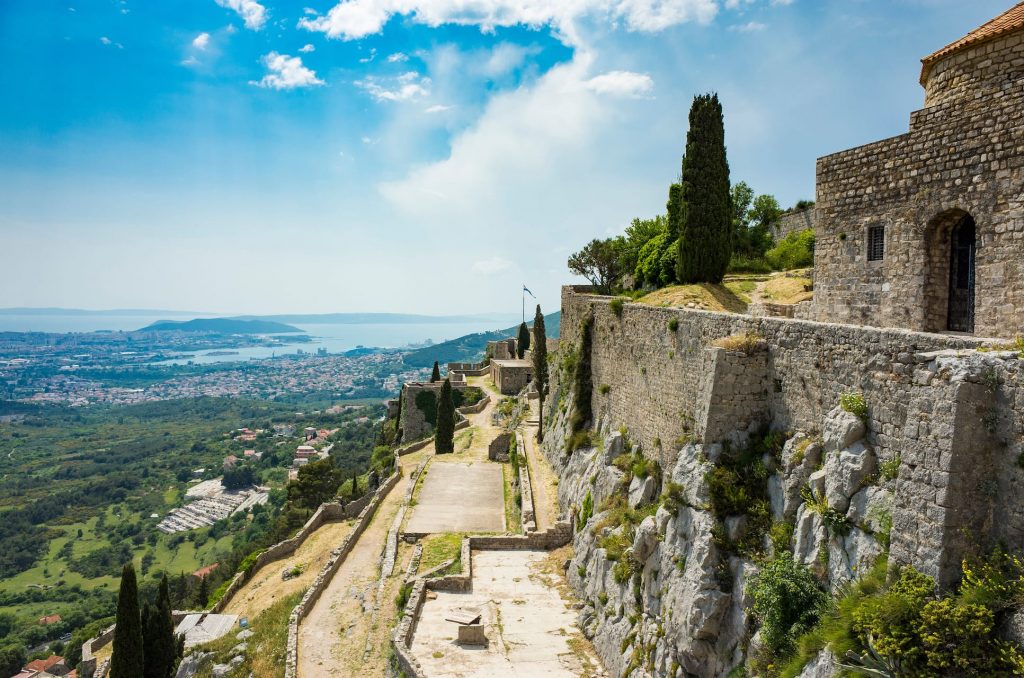 Leaving Diocletian’s palace and heading 7 miles away into the countryside will bring you to the Klis fortress. Erected by the Illyrian Dalmatae tribe as their stronghold from 100 BC onward, the fortress eventually passed to the Romans. In the 7th century the Slavs invaded and captured the fortress which started off a literal game of hot potato, played with a strategic point. It passed hands to a number of Croatian kings who used it as their home. From then it traded hands to the Turks, Venetians, Austrians, French, Italian and German forces during WWII and eventually to the hands of the local population after the break up of Yugoslavia.

In recent years a new invader has arrived at the fortress, fans of hit TV show Game of Thrones. In its fourth season, Daenerys Targaryen and her army arrive at Meereen to free the slaves. The city of Meereen being none other than an amalgamation of Klis Fortress and the Palace of Diocletian. The street scenes shot at the palace might be easy to miss but there is no mistaking the gripping fortress scenes.

Organizers accommodate Game of Thrones fans with an onsite exhibition dedicated to the show. It includes set photos and other memorabilia. For visitors who are not fans, the fortress still impresses with its ancient structure and atmosphere, small church and museum.

The fortress is definitely worth a day off from the beach and the short journey into the Croatian countryside. Back in the city, having a summer vacation surrounded by an Old Town that was built hundreds of years ago, makes a vacation in Split different from a normal resort stay.